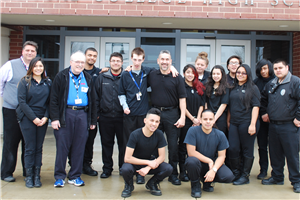 Criminal Justice instructor Leo Becerra and Bobby Evans (center) with members of the Criminal Justice class in 2015 when Becerra received the Acme Teacher of the Month award. Evans nominated Becerra for the award.

Throughout his lifetime, Bobby Evans has inspired people around him. This was especially true when he spoke at the 2016 Avon Grove High School graduation ceremony, utilizing an assistive technology device called Access 1000.

Cattell has ultimately helped him utilize six different devices throughout his time in school, including his current device, the Access 1000. “We’ve tried different technologies with Bobby; that’s how we find out what works for him,” he said.

The Access 1000 is a device that helps Evans communicate complex thoughts and ideas using his own voice and spontaneous novel utterance generation (SNUG). SNUG allows Evans to say anything he wants at any time by providing access to individual words, word combinations and commonly used phrases in everyday language. “Once he got his voice, it was amazing. It has changed our life,” said Mrs. Evans. “We would not be where he is today if not for the CCIU staff.”

For his graduation address, Evans wrote and programmed the entire speech into the Access 1000 and rehearsed for weeks leading up to an audition in front of a panel of judges. Soon after his audition, he learned that he was chosen as the graduation speaker for Avon Grove High School’s Class of 2016.

On graduation day, Evans led the class into the stadium and delivered his speech to over 4,700 people. After the speech was over, the entire class and school administration gave him a much-deserved standing ovation. “His speech just goes to show that appearances mean nothing and it’s what’s in your head and in your heart that matter most,” said Julie Donell, Evans’ life skills support teacher.

Evans has worked with a dedicated team of specialists and instructors from the CCIU and Avon Grove SD who have encouraged his success and growth. Donell taught him functional academics, community-based instruction and helped him participate in the Discover Program and the Technical College High School (TCHS) Pennock’s Bridge Campus Criminal Justice program. She has worked with him for the past three years. “Bobby has learned that I’m always going to challenge him,” said Donell. “In the long run, that’s what is going to help him to become independent.”

Although assistive technology helps him speak electronically, Evans learned how to build his vocabulary through working with speech therapist Meredith Bretigan, who has worked with him for the past three years. “He has matured so much these past couple of years,” said Bretigan. “He is focused, driven and knows what he wants. He has an amazing work ethic.”

This focus was especially evident during his time in the Criminal Justice program at TCHS Pennock’s Bridge. Evans fully participated in the classroom over the past two years, including races in his walker. “He can do anything he sets his mind to,” said Leo Beccera, a Criminal Justice instructor. Having Evans in the classroom taught students and instructors valuable lessons. “It helped us look at a person for who they are, which is what we are supposed to do in law enforcement,” he said. “Teaching him made me sensitive to issues and more understanding of what others might be struggling with.”

Evans’ team of supporters has seen him grow into a smart young man. “He has learned how to speak for himself and advocate for his needs,” said Donell. “He knows what he wants in life and he speaks up about it. He doesn’t let his physical appearance deter people from challenging him.”

People often say it takes a village to raise a child, but as Mrs. Evans stated, “For Bobby, it took the tri-state area.”