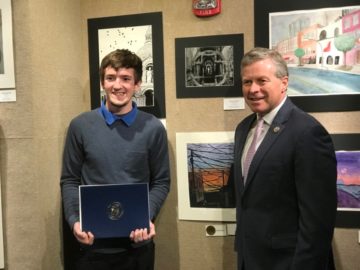 On Tuesday, April 24, 2018, at the Baum School of Art, Allen HS senior Jared Albright attended an award ceremony with students from 10 other Lehigh Valley high schools. Representing the 15th Congressional District, close to 100 students submitted artwork to be considered in the annual competition. The entire gallery will be on display at the Baum School through May 7, 2018. As the first place winner, Jared’s art will be displayed in a group exhibition in the Cannon Tunnel Gallery of the United States Capitol in Washington DC for one year. In total, five third-place, four second-place and one first-place winner were announced, each receiving commendations from the offices of Congressman Charlie Dent and Senator Pat Browne, Baum School of Art scholarships and cash awards.