Students experience the many facets of STEAM education 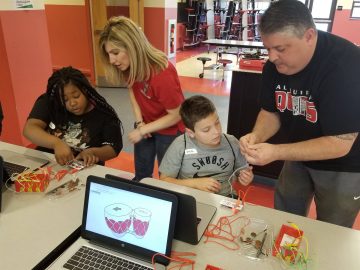 The Aliquippa Elementary School STEAM Walk is an event designed to get students excited about science, technology, engineering, art and math pursuits by exposing them to the possibilities. Students in grade 4-6 visited several stations. The first was a video and discussion on air lift and force followed by the experience of creating soda straw rockets and helicopters from paper templates which the students launched from a platform in the school’s library.  Representatives from Covestro, a company that creates polymers, explained how their products were created and led students through the creation of their own “putty,” made of Borax and glue. Next, Carnegie Science Center staff sparked a discussion on modern-day pollution and read a story about an imaginary town that endured the effects of contaminated water. The students then tested the fictional town’s “wells” using a Universal Indicator solution to determine if certain areas’ water was safe or not. Another station featured a team of nutritionists who walked students though making a nutritious smoothie, while another featured an exploration of circuitry using a Pac-Man game. There were numerous other stations sponsored by the Carnegie Science center at which students experienced life as an astronaut and several engineering experiments. Visit the district’s web page to learn more about the STEAM Walk.