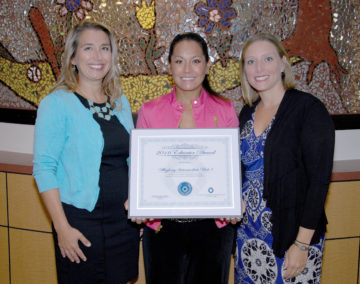 The Allegheny Intermediate Unit (AIU) is pleased to announce its receipt of the 2016 Educator Award from the American Foundation for Suicide Prevention. The award was received at the Annual “Out of the Darkness Walk” for Suicide Prevention on Saturday, Aug. 27, sponsored by the American Foundation for Suicide Prevention, Western PA Chapter. The AIU, and members of its pupil personnel staff, Alicia Chico, Natalie Melnik and Jamie Moder, were honored for exemplifying suicide prevention education excellence and for their outstanding achievements and work. Representatives of Intermediate Unit 1, which serves Fayette, Green and Washington counties, were also honored.

This annual community walk, which was attended by about 2,200 people, helped to raise funds and awareness for suicide prevention programs in western Pennsylvania.

The “Out of the Darkness Walk” brought together suicide loss survivors, attempt survivors and community stakeholders in mental health and suicide prevention. A moving dove release preceded the beginning of the walk.