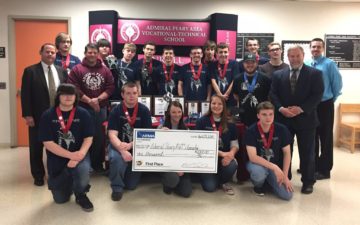 Admiral Peary Area Vocational-Technical School students put their design and fabrication skills to the test during the Southwestern Pennsylvania BotsIQ Finals competition at California University of Pennsylvania. Their hard work paid off: two of the school’s teams won first- and second-place titles. The competition pits remote-controlled robots from different teams against each other in a battle to disable or destroy the competitor’s robot. The machines are designed and constructed by students using math and science skills they honed during the year. According to an article in the Altoona Mirror, contestants from 62 schools competed with 80 individual robots this year. Admiral Peary’s first-place team will have a chance to compete in the National Robotics League Competition at California University of Pennsylvania in May. See photos of the robots on the Admiral Peary AVTS Facebook page.