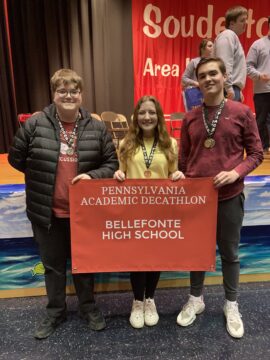 It’s been more than a decade since the Academic Decathlon team from Bellefonte Area High School competed at the state level, but this year’s students broke the mold. In early March, the team competed at the two-day state-level competition, boasting many student awards. They didn’t score high enough, however, to qualify for nationals, but teacher and Academic Decathlon coach Kat Momenzadeh said it’s a feat they’re still proud of.

“This was a super-involved two-day event with 13 different competing schools, many water and shark puns, and spontaneous singing for inexplicable reasons,” she explained enthusiastically. “It was a really fun time.”

Additionally, several students placed and medaled based on scores in their specific divisions, which is also determined by their grade point averages:
4.0 GPA: Honors
3.6 GPA: Scholastic
3.0 GPA: Varsity

Academic Decathlon is a competitive test-taking team where students study to test in 10 subject areas. This year, the topic was on the use of water as a resource. “So, the literature was thematically related to water, the social science was ancient cultures dependent on specific water systems, the science was marine biology, etc.,” Momenzadeh said.

Competing schools were also split into small and large divisions, with Bellefonte Area competing among the biggest-populated schools in the commonwealth – many that also have Academic Decathlon as a class to complement its club. Speeches are also part of the competition, where students must deliver a three-and-a-half-minute prepared speech to a room of judges. Then they have to deliver a two-minute impromptu speech where a judge gives the student participants a notecard with three speech topics.

Last month, the team was recognized by the Bellefonte Area school board at a public meeting. Momenzadeh and senior Ella Underwood explained more about the club to the nine-member board of school directors.